While at church, when Stewie learns that the Wi-Fi is bad and they are not giving out cookies, he drops an F-bomb, which everyone at church somehow hears, causing Lois to be shunned by the entire town. Brian and Stewie begin to consider it had to do with him shouting his true feelings. Wondering where Stewie could have heard what she believes is his first word, Lois initially suspects television, but Brian points out that all Stewie watches now is Caillou, which she learns has no curse words, just odd dialogue. She then guesses Peter to be the source of Stewie swearing, and waxes the stairs for him to fall down (again), though Peter only shouts proper terms as he has been hanging out with Boris. When Lois eventually discovers herself to be the root of Stewie’s profanity, she goes to a rehabilitation facility, where she gets scolded for using the F-word as her meditation mantra, and decides to accept her swearing habits and states she is fine how she is. 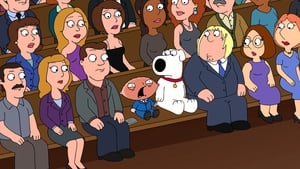